Effie Paleologou is a London-based visual artist, whose work has been exhibited nationally and internationally and is held in collections such as the Victoria and Albert Museum in London and the National Museum of Contemporary Art in Athens. She talks with me here about her current body of work Microcosms, where she developed a fascination and photographically based preoccupation with chewing gum that has been spat from the mouth onto the ground. 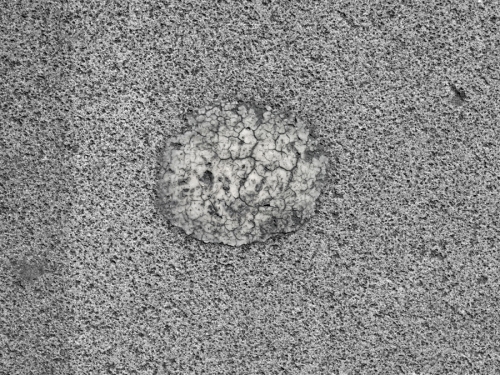 When did you first notice chewing gum on the ground? And what was it that interested you about it?

A few years ago I heard that in Singapore there is a fine imposed for spitting your chewing gum on the street or pavement. That brought in mind a comment that a dear friend once made. We were in a taxi in Thessaloniki heading to the airport for him to catch a flight to Vienna, when the taxi driver started complaining about how inconsiderate and uncivilised passengers can often be, leaving rubbish behind in his car. To that my friend replied ‘mind you though, sometimes a bit of dirt can stand for a different kind of civilisation too’. Later on, he explained to me that for all its cleanliness and grandeur, Vienna seemed to him too polished, too sterile and somehow inhospitable. I’ve never looked at debris, or the lack of it, in public places in the same way since.

When did you begin to realise its potential for artistic subject matter? Can you   explain its pull on you as an artist and how it became like an obsession?

The moment I saw my first small prints of chewing gum on my desk I felt like a child who digs in the back garden pretending to be a gold-miner and then indeed hits gold. It was the uniqueness of each piece of gum, in terms of size, shape and texture that hooked me. Soon after I started behaving as a collector of some sort. And collectors are often obsessive.

Technically, you began recording these ‘landscapes’ on your small handheld camera but for the later, more final pieces, you used a large format camera; carving out space in the public realm between you and the ground. Can you describe what the choice of technology brings to the work, how it transforms it? And also can you tell us a bit about this mental and physical space you created?

The work dictates the use of a certain technology, not the other way round. So, it was when I started perceiving each and every gum residue as a micro-world, a minute geological formation, a kind of an island in its own right, that I knew I had to allow for the most accurate description possible, hence the large format camera and the macro lens. It was the only way I could do justice to the elaborate structures I found. Additionally, and much to my surprise, this method of working offered some other advantages too. While making me very noticeable to passers-by it nevertheless rendered them unnoticeable to me, as I had to concentrate, on my knees, looking down through the lens. It was as if I was wearing an invisibility cloak that could also turn the streets of the city into a laboratory.

How did this project grow conceptually? From pieces of gum on the ground – things we put in our mouths with no nutritional value – to telescopic visions of biology (referenced in the title) or star gazing – how did this subject, in all its fullness, reveal itself to you? Can you let us into your thought processes here and the revelatory aspect of that journey?

It grew slowly. I’ve been preoccupied with this project, for several years. So I had the time to observe and recognise the qualities to be found in those insignificant, mundane, grubby blobs. Dirt, like dust, is a trail, evidence of life that we are constantly trying to get rid of. But chewing gum is stuck stubbornly on the street surface, enduring the wear and tear of time. In this way each piece can take on a fossil-like appearance. On top of this, the gum’s relation to the mouth hints at the thin line often to be found between pleasure and disgust. By the same token, if saliva is a DNA carrier, then each piece identifies an individual, offering up forensic possibilities.

You have different forms of presentation for this project –large-scale prints, circular images, even graphite rubbings (which reference the earliest photographic processes without the need for the camera – the direct print of an object onto paper). What does each aspect bring to the work as a whole?

Well, all three forms of presentation, among other things, address ambiguities of distance. Uncertainty of what is close and what is far, micro and macro, prevails.

In the large-scale images the sense of an aerial view is implied, of looking down to geological formations of sorts. The circular prints formally resemble simultaneously the shape of the Petri-dish, the view through a microscope as well as the telescopic view of the cosmos.

As for the rubbings they introduce the immediate proximity of the surface, the fact that there is only a sheet of paper between my hand and the pavement. They are the product of touching and yet they resemble distant lunar landscapes, an otherness that ironically we are familiar with only through photographs.

From the series Microcosms, rubbing 18x25cm

Ambiguity is key. How do you enable ambiguity to work well? How would you advise artists to work with ambiguity? How do you strike a balance between opening the work up and it not becoming lost?

As you’ve just pointed out, ambiguity, when it works, is a balancing act between actuality and suggestion, seeing and interpretation. It is something that there are no guidelines for, nor it is always necessary. Often though it is a quality achievable at the last stages of the work, mainly as part of the editing process where almost without fail one realises that less is more. You see, paradoxically, for ambiguity to appear one needs maximum clarity of intentions.

Going back to the artistic process, I was lucky enough to see your notebooks. What part in the creation of your work do your notebooks take? I must explain that they are very simple objects of beauty in themselves. How do they help you figure it all out?

Mainly they are reminders – or proofs when in doubt – that I saw this, I noticed that, I perceived a potentiality in this one or the other. In that respect they are integral to the process. Nevertheless, just a fraction of these visual notes ‘make’ it into a project.

What did it bring to you personally and to the work as a whole to have Iain Sinclair write about it?

It’s wonderful to have Iain’s acute understanding and perception of this project, in particular, for invoking the historical and cultural contexts that, he senses, surround the work.

Previous writings refer to you as a flâneuse. What does this term mean to you (as an artist, as a woman)? How do you stop it from becoming restrictive?

Mean City, an early project I worked on for most of the nineties, is an account of my nocturnal wanderings around the cities of London, Paris and New York. It was partly informed by the figure of the flâneur, which, although central in discussions about modernity, is predominantly a male role. So the project explored the extent to which we can talk about a feminine flânerie – are there any limitations, spatial or otherwise for the contemporary flâneuse in order to experience the city?

The notion of the flâneur has increasingly become almost synonymous to that of wandering. And there is nothing restrictive about wandering – quite the opposite.

Besides, I still find endlessly fascinating and poetic some of the flâneur’s alter egos such as the rag-picker or the detective. Evidently all this is present in Microcosms as well as an echo of Walter Benjamin’s idea of ‘botanising on the asphalt’.

Iain Sinclair’s response to Microcosms can be read here: www.photomonitor.co.uk/2015/09/the-cosmological-eye/